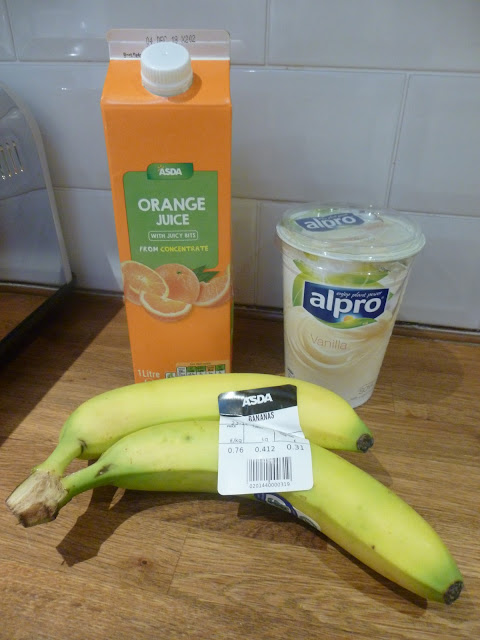 So here we are in Week Two and I decided whilst I was at Asda buying some none food items for the house to get in some supplies for the Challenge.

My usual yogurt was on offer at just £1 so I decided to have a bit of normality in my life and pick up a tub.  It will do me four breakfasts along with some of my fruit ... these two bananas and perhaps some of the tinned peaches or mandarin pieces.

I also bought the orange juice as I am painfully aware that my fruit and vegetable consumption is below what I thought it would be.  Just a glass a day over four days will help pull the numbers up, and no doubt be good for me too. 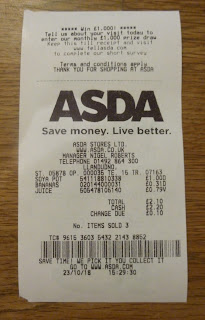 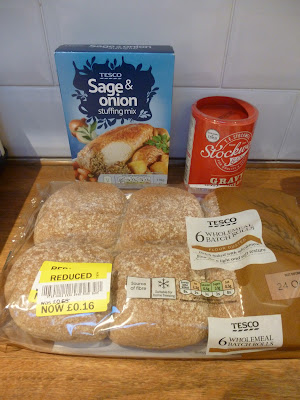 And to bring things up to date (I get to use the computer on a very intermittent basis at the moment so I am doing this shopping on the same post) I bought these last night from Tesco.

Of all things I was fancying some stuffing balls.  Tesco used to do a basics line box for just 15p but seemingly that has been discontinued, the same size box of their own brand label was 25p but this larger one was just 40p so seemed a much better buy.  Of course with stuffing balls you need some gravy ... well I do ... so I bought some of their new label 'Stockwell' gravy mix,totally vegan and just 20p.  Stockwell has replaced the old basics 'stripey line' in a lot of the packet foods.

And then I had a peruse of the Reduced Section and came across these bread rolls for just 16p, it was a no brainer I just had to get them.  Now some of my stuffing mix, some beans and maybe something else will be turned into burgers to go onto my new 3p each buns. 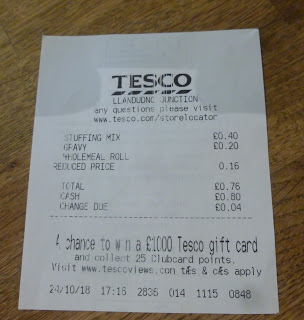 A total of 76p was spent in Tesco.

So this weeks shopping has set me back the grand sum of £2.86.

Email ThisBlogThis!Share to TwitterShare to FacebookShare to Pinterest
Labels: Shopping, Shopping and Eating for £1 per Day