Three from the Tunnel 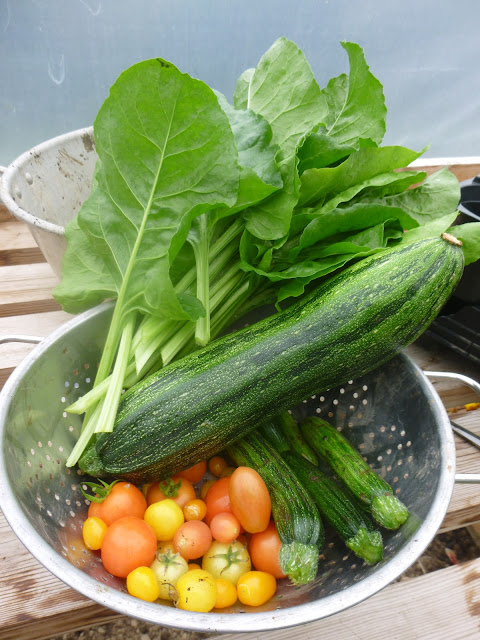 My three from the polytunnel this week are:

Yes even the big one is a courgette ... I purposefully planted no marrows this year realising from last year that some of my courgettes always get to marrow size before I even notice them!!! 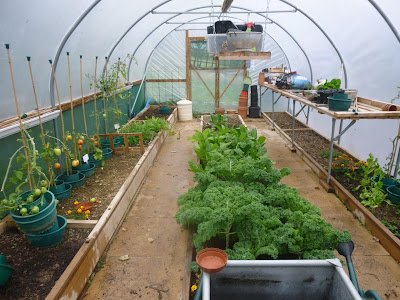 Wil from Holland left a comment a few days ago asking for photos of the tunnels.  So while I was in there picking and tidying up I snapped these.

There's not much left at this time of year, but the tunnels are still adding homegrown goodness to our daily meals.  Alan picks some fresh leaves every day and a few fresh tomatoes for his evening salad, just yesterday he used the last of the cucumbers.  As you can see for this weeks allowable home picked stuff I have chosen three things that are still reasonably abundant, although the tomatoes will be all gone by next week. 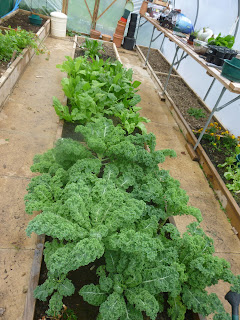 My most prolific things are the Spinach and the Kale.

I'll get some photos of the Net tunnel when I'm in there next week choosing three more crops to help fill my limited larder.

I'm allowed ONE picking a week. 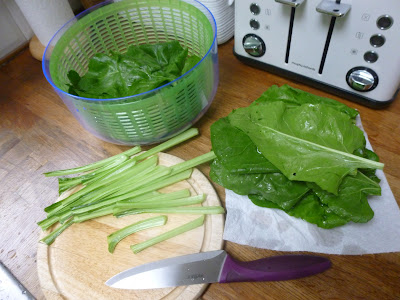 And because I am allowing myself just one picking a week I am making good use of everything that I pick.  This week's Spinach for instance is being used in four different ways.

After washing, some of the leaves were spun relatively dry, wrapped in kitchen paper then bagged and popped into the fridge, they will be used to make a version of  'Green Spaghetti' a Jamie Oliver recipe that I love. 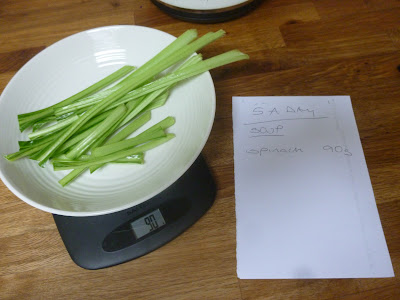 The stalks that I was about to chop up to add to the soup pot were weighed, as I am trying to make sure I get at least my 'Five a Day' each day.  Seemingly one portion of your five a day weighs in at 80g ... hence my checking. 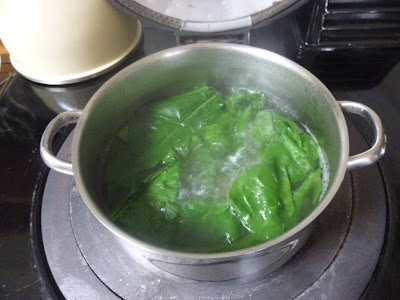 The rest of the spinach leaves were lightly blanched, quickly cooled down in cold water, wrung out and then chopped ready to go into one of my large ice-cube trays to make four cubes of cooked spinach to add to any dish that I make that I think could do with a bit of a green boost. 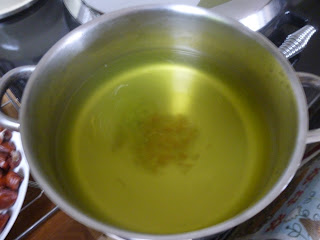 The blanching water had some of my Universal Seasoning added to it to make a tasty stock for my soup.  The thought of throwing blanching water away always horrifies me, think of all that goodness you have just, albeit briefly, boiled your veggies in going down the plughole to benefit no one!! 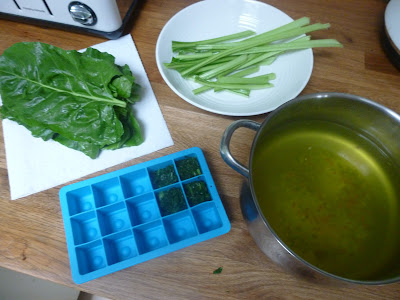 1.  Leaves for a pasta meal

2.  Stalks chopped up to be added to soup.

3.  Blanched, chopped and soon to be frozen spinach ready for adding to any meal that needs it.

4.  Blanching water turned into stock as the basis for the soup.

Not a thing wasted. 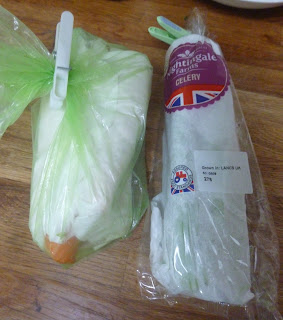 After the chopping session to make the large batch of soup for next week, the unused carrots and celery were carefully wrapped in kitchen paper ... which takes away moisture from the veggies and then feeds it back as the veggies start to dry out ... and bagged to go back into the fridge drawer. 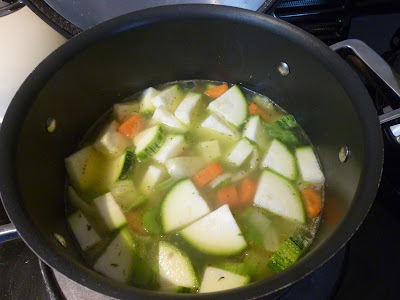 It was all brought to the boil in my large stock pan and then left to putter away slowly for a couple of hours in the bottom oven of the Aga. 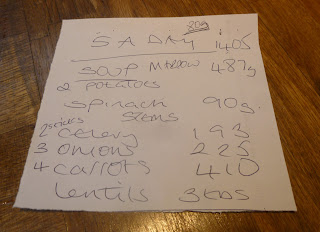 While it was doing that I washed up and tidied the kitchen and then sat down with a cup of coffee and did my workings out for my five a day portions.  I had been weighing the vegetables before I put them into the pan and all these figures were added up (the potatoes don't have a weight as they do not count towards your five a day as they are a starchy vegetable).

With a total combined weight of 1505g, including the lentils which I counted in at 80g, it means that the large pan of soup has 19 portions of my five a day.  I will have to wait and see how many bowls of soup I get out of this but I'm guessing as a minimum there will be six, possibly eight.

It feels like a very successful day in the kitchen.