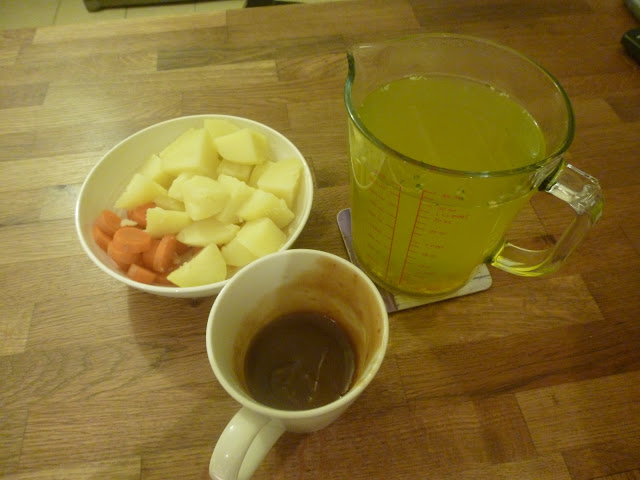 Last nights meal gave me lots of lovely leftovers, and they were purposeful leftovers.  Things I had made too much of on purpose as I knew exactly what I wanted them for. 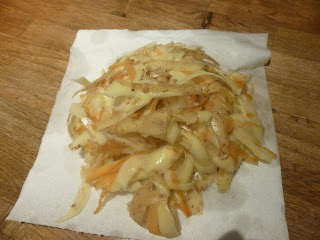 Even the peelings from the potatoes and the carrots have been washed, patted dry and put into a bag in the freezer.  These will be added to a pot of soup, as will the cooking water from both, into which I put a couple of spoonfuls of Universal Seasoning while it was still hot. 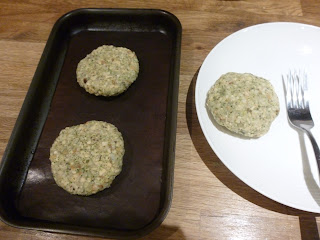 I used half the pack of stuffing mix and formed it into three patties, knowing full well that I would only be eating two of them, but doing it this way saves me time the next day when I already have some made up mix to add to the next dish. 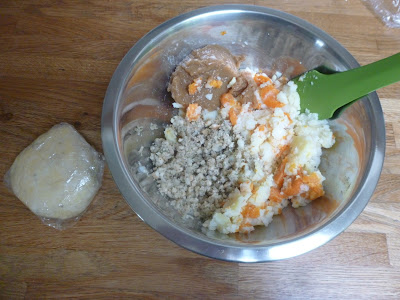 The third patty, along with the leftover gravy and the mashed up potatoes and carrots has been tipped into a bowl ready to make a pasty for my tea.  The pastry is the other half of the portion I made last week and froze.  I left it in the fridge overnight to thaw out slowly and then pulled it out of the fridge while I got on with assembling everything else to bring it to room temperature, now it is nice and workable. 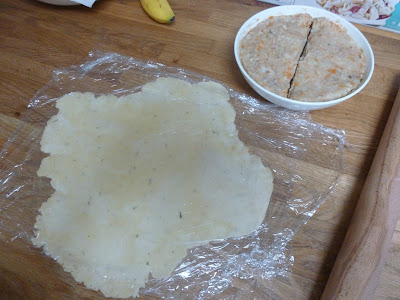 Roll out your pastry.

I do it between two sheets of clingfilm these days as it means you don't need more flour on the worktop, which as well as using up more of your flour, dries out the pastry and makes any re-rollings much harder to work and not as tasty. 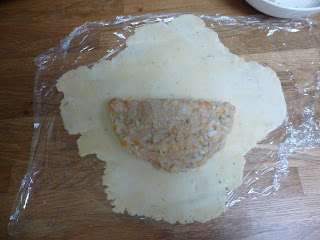 As you can see from the photo above I put my filling into a small bowl and divide the mixture visually.  Last week I just half filled the bowl,  either way this gives you a nice neat shape to fill the pasty and means that you have a filled to capacity pasty with no air gaps.

Next I use a pastry brush to wet around the edges of the filling ... 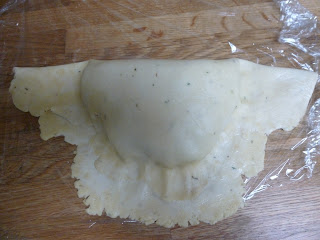 ... so that when I use the cling film flip the pastry over the filling I can push it together and the pastry sticks to itself nicely.

Then trim off any excess pastry, leaving enough to once again go around the edge with some more water and then fold over the pastry and crimp, either with your fingers as I do or fold over and push down with the back of the prongs of a fork for a fancy edging. 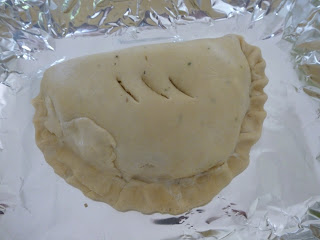 I accidentally made a couple of little tears when I was crimping so I simply repaired them with a little bit of the excess pastry, once again sticking in place with water.

After making anything with pastry I usually put my assembled pie or pasty into the fridge for at least ten minutes to chill before baking. 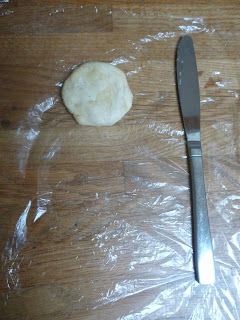 The trimmed off excess pastry was rolled into a little ball, flattened out with a rolling pin ... 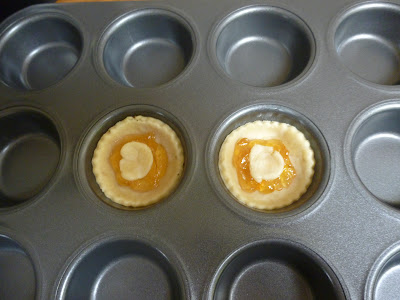 (Well Marmalade Tarts in my case as that's all I have.) 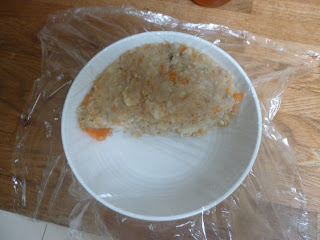 The other half of the filling mix has now been wrapped in clingfilm (yes the same clingfilm that I used for rolling out purposes, waste not want not) and is in the freezer.  Still in the bowl while it freezes and then it will be bagged up ready to be used as another pasty filling sometime during the next two weeks.