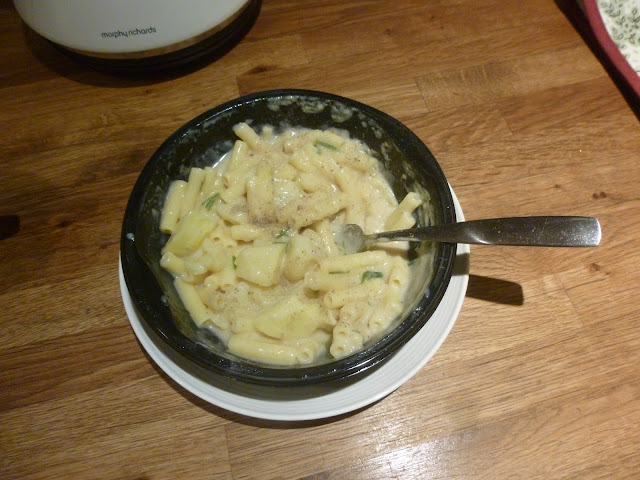 Eating the stores last night meant having this out of the freezer.

It was a Mac n Cheese ready meal.  Now I remember why I don't buy ready meals that often ... even when they are reduced with a yellow sticker as this one was.

It looked promising on the cardboard sleeve, and even look quite large and appetising inside it's black dish while it was still frozen, then I reheated it in the microwave ... once the vegan cheese was melted the whole thing seemed to shrink before my very eyes.

My first thought was what can I put into it now, while it's still hot to make this more filling.  There was no time to cook up some veggies, and to be honest I've not been in a veggie mood this past couple of days or the veggies would have been cooking alongside it. Then I spotted some leftover boiled potatoes in a Tupperware box in the fridge.  I chopped them up smaller and stirred them into the piping hot sauce.  It made it more filling and helped soak up some of the excess cheesy sauce, but it was still not the gorgeousness that a homemade Mac n Cheese usually is.

It'll be a while before I buy another ready meal for sure.