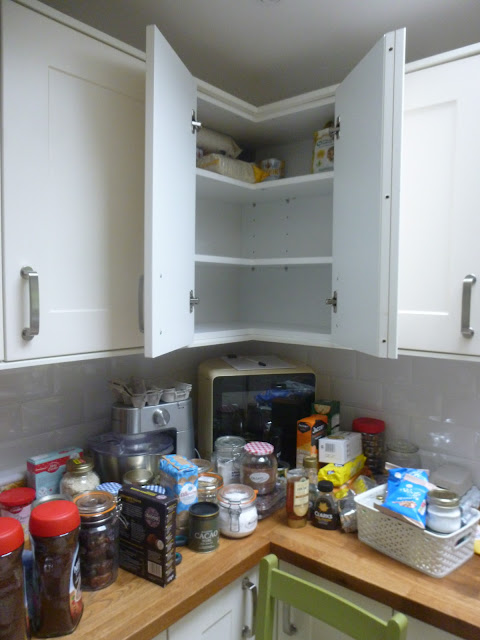 So, I carried on around the kitchen.  Emptying out the cupboards wiping them down both inside and out and checking through the foodstuffs.  Virtually everything went back in, just not always in the same place or the same cupboard.

Rationalising the cupboards is very therapeutic ... once you get going.  The thought of starting it, or even going back to it after stopping for a coffee and a sit down is not quite so good. 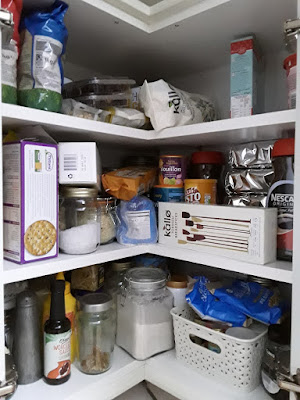 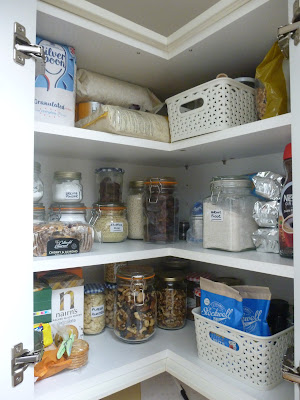 Gosh I am loving my newly organised cupboards though.  And I much prefer having as much as possible in jars so I can see exactly what I have through glass and not just by looking at garish packaging.

The baskets in this cupboard are holding all the little bits and bobs.  Tubs of yeast, vanilla extracts etc. Even the spice shelf was organised.  I had thought that this one would pretty much remain the same. 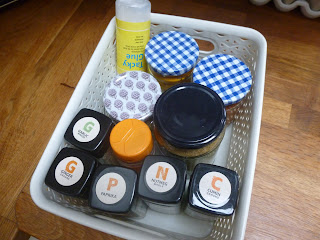 But after checking through what I had, getting rid of a couple of dried up old jars of spices that didn't even smell spicy anymore ... 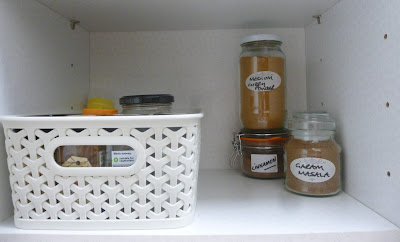 In the not too distant future the spices will move into one of the other cupboards and this one will be simply 'the medicine cabinet' ... as the other two shelves in here already are. 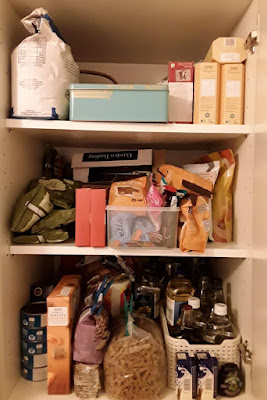 The cupboard that was holding the excess Christmas goodies was attacked last.

As well as Christmassy things Ginger's tuna is stored in here, alongside oils and various vinegars and large packs of dried foods and any breakfast cereal that we might have.  At the back of the middle shelf is my large drawer of seeds for planting ... something else I will be sorting through soon ... and on the bottom shelf behind the food are all our flasks and reusable travel mugs. 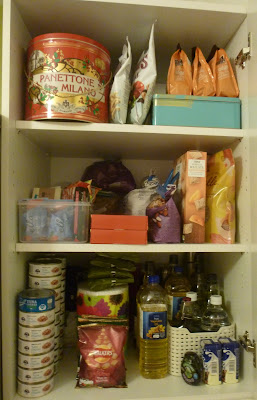 And this is what it looks like now after a good tidy up and clean out.  I removed the seed drawer and made everything more logical and even though I have now added another 24 cans of tuna for Ginger and the Panettone that we received as a Christmas gift, the cupboard looks so much clearer.

I'm really pleased with this reorganisation of all the cupboards.  The next job now that we have been eating through the contents for the last few days is to clean out the fridge properly.  Empty it all out clean and anti-bac the shelves and then assess just what we have left.  At least I can see the shelves now so the prospect of this job is not as bad as it seemed a few days ago.