Eat the Stores - The Fridge 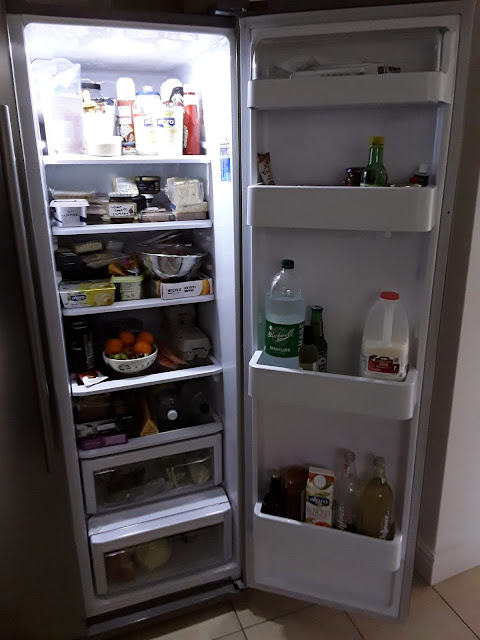 This is the fridge at the start of this Challenge.

My how dark it looks when it's stuffed full of food ... 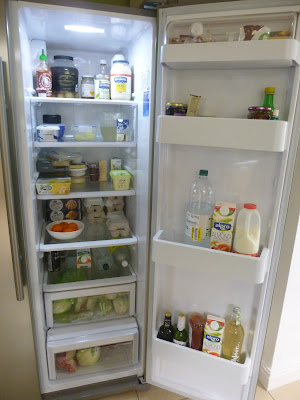 ... I much prefer the brighter, lighter look that it has this morning.

After eating through the contents for almost two weeks the fullest shelf is now my dairy free shelf, this is mostly because these items have a super long shelf life and I tend to stock up when they are on offer.  Last time I was in Sainsbugs, just before Christmas they had lots on offer ... so I did.  There's no huge rush to use them up I'll just work my way through them as and when.

Alan's 'cheese shelf' has diminished greatly, mostly through eating but also because quite a bit of it was portioned up and popped into the freezer.

Talking about the freezer, I'm dreading having to sort through it.  I think I'll leave that particular little task until right at the end of the month when hopefully we will have made some in-roads into the mass of hastily frozen bits and bobs. 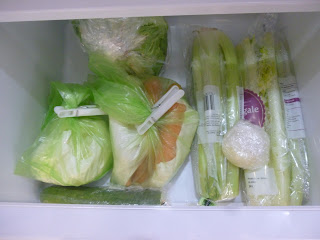 The salad drawer is looking a bit sparse.

I've just used that little bit of wrapped white onion from it and most of the smaller of the wrapped lettuces on my lunchtime salad and cheese bun, although the cucumber was too far gone and the chickens got an unexpected treat instead. 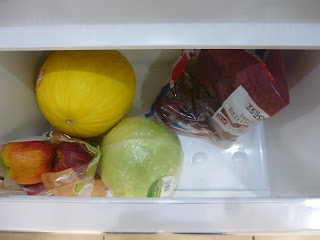 The lower drawer is decidedly spacious now, and to tell the truth until I opened it I didn't even remember that we had a melon.  I can't remember buying it and it has no Use By or Best Before date on it to give me a clue as to when I did get it, but it is still in good condition and can easily wait to be cut into until Alan gets back home.  There's no way I could eat a full melon on my own even over a full week. 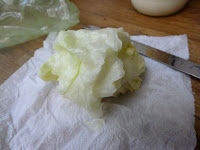 I was going to eat all of the oldest Iceberg lettuce on my buns this lunchtime but there was more of it than I thought ... I always forget how tightly packed the middle of  bought lettuces are compared to homegrown ones.  At first the chickens were going to get this leftover piece but then I thought nope, it can be used to make a  crispy homemade coleslaw to go with my tea one day this week.  So it's gone back into the salad drawer. 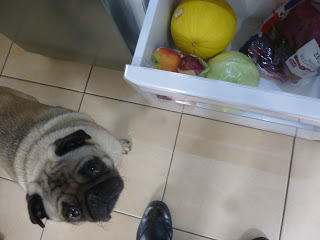 Of course as soon as I started pulling out the drawers of the fridge Suky was there, photo-bombing as usual  :-) 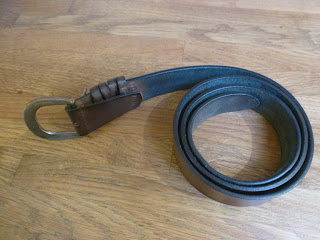 I'm sorry for the much later than usual posting today, but first thing this morning I was dropping a neighbour off at the train station and while I was out I ran a few errands, including trying to get my leather belt fixed.  Now although it was only a cheap sale buy from Sainsbury's about four years ago it's a bloody good belt and until weekend my only belt, so it's seen a lot of use as I wear jeans every day.  But I hate this throw away society and I wanted it fixed rather than binned.

The young lad at the Timpsons outlet kiosk at Tesco had a go, but 'his glue wasn't strong enough' (!!!) and his sewing machine 'had the wrong needle in it' .  It really is only two lines of stitching required but I don't have a needle or thread strong enough (I did try), so tomorrow old fashioned cobblers here I come.