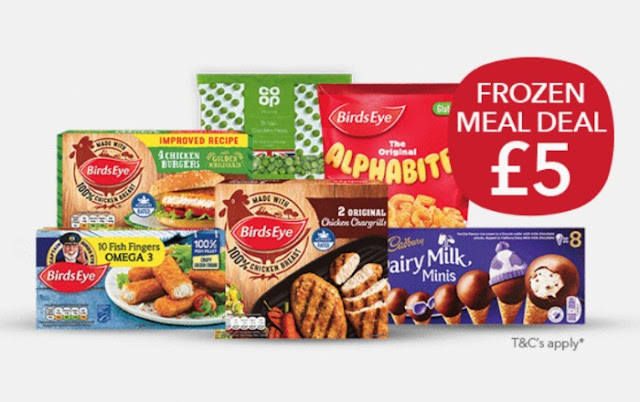 I'm still rather weirdly in an almost 'backlash shopping mode'.

After getting my hair cut the other day I called into the Co-op for some Custard Doughnuts ... I know  ;-)

The first thing that greets you when you walk in our little Co-op is the fridge with the current £5 Frozen Meal Deal, and before I even realised what I was doing I was retracing my steps and picking up a basket.

For my five pounds I got:

Typing this out has highlighted that of these six foods there are only three that I would eat.

Oh well, Alan will be very happy with his meal of chicken grills and peas ... and he'll know it's his because his name will be spelt out on the plate in Alphabites for all to see. 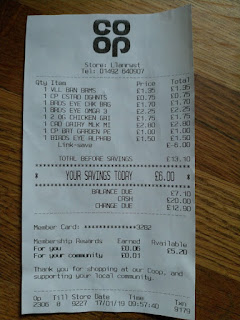 Of course me being me wanted to know, albeit rather belatedly, if this actually was the brilliant bargain the Co-op claim it is.  The poster on the fridge states that the offer lasts until 22nd January and that the foods in total are worth £11.  So as soon as I got home I put the food in the freezer, put the kettle on for coffee and fired up the computer to check it out on mysupermarket.co.uk.

There I found out that it would have cost me approximately £9.70 in Tesco and £9.05 in Asda to buy the same or very similar branded foods, so it is still a good deal, but it shows me that on average our Co-op prices ... small branch, small town/large village, bit of a monopoly as the only 'supermarket' ... are slightly higher than the bigger two supermarkets.

Which for the reasons mentioned above is only to be expected I guess. 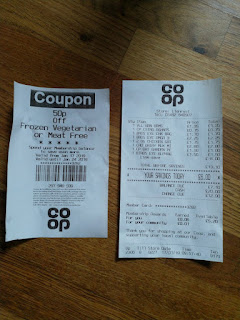 The self service checkout I used also spat this 50p coupon out at me.  Soooo ... if I was clever I could go back on the final day the coupon is valid, which should mean the new frozen meal deal is out and using my membership rewards available to nab myself a totally free basket of food plus get 50p of a meat free item to go with it.

It's all bloody temptation at the moment.   :-)

Email ThisBlogThis!Share to TwitterShare to FacebookShare to Pinterest
Labels: Chatter, Eat the Stores