Eat the Stores - Meats and Cheeses 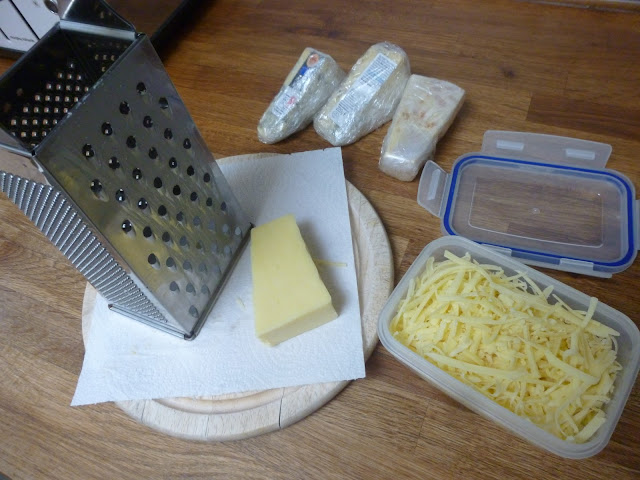 After sorting and re-packaging some of the vegetables yesterday, today it was time to deal with the meats and cheeses, something I don't eat but something Alan loves ... so it had to be done.

Now the cheeses are easy to deal with and I don't mind doing this too much.  The unopened packs of cheese, the Stilton and the Wensleydale with Apricots were simply sliced in half and then tightly wrapped in clingfilm ready to be simply popped into the freezer.  Alan eats them in wedges so that is how they needed to be frozen.  The block of opened Cheddar was grated as I find that if you freeze it in a block once thawed it is too crumbly ... and anyway grated cheese goes so much further and can be used straight from the freezer.

All cheese can be frozen, but cheeses like Cottage Cheese and soft spreadable cheeses tend to change texture on thawing, which is no problem if you are just going to cook with them but makes them less appealing to eat just as they are.

I should point out that the vegan cheeses that I eat also freeze well, but usually it has a much longer best before date on so I rarely have to freeze this whole, although I do tend to have one ready grated 'Cheddar style' block and a 'Parmesan style' one ready for quick use straight from the freezer.

Once the cheese shelf of the fridge was looking clearer I moved onto the packs of ham that were lurking at the back. 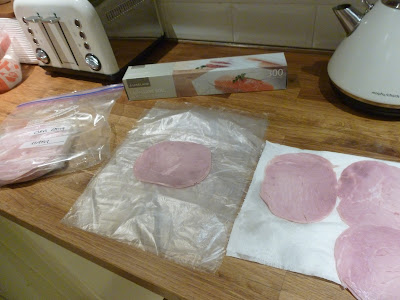 I don't like dealing with meat ... cooked is slightly more handle-able than raw but it's not my favourite job in the world, but I cracked on anyway and got it done.  The date was just up on the meats so I was literally getting it ready for the freezer on it's last available Use By date ... phew! 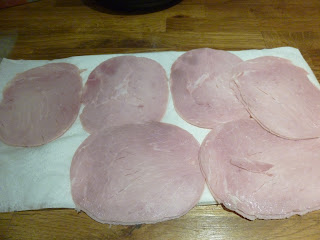 It was wet in the packs, so the first job was to make it less so before freezing as the water would have immediately covered the slices of ham with ice ... not to be recommended for long term storage.  So while I was getting everything ready I left it sat on some kitchen paper. 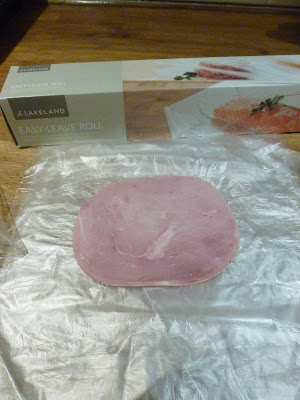 Next I had to decide how many slices to put in each pack, I was going for four at first, thinking he would be having two buns at a time for lunch, but then I thought that as we are working on reducing our portion sizes sometimes Alan might only want one bun, so in the end I went with two slices frozen together in each sheet of Easyleave.  This is another product I get from Lakeland  (see it here) and is brilliant for keeping things separate when frozen. 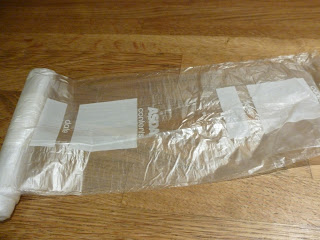 Before I discovered Easyleave (and back in the day when I couldn't afford to buy specialist packing materials)  I would either reuse the bags that I had brought home loose fruit or veg in (and picking up any that I found discarded in empty supermarket trolleys) or else I would buy the rolls of cheap food bags and cut the bags open at the bottom and sides to give me flat sheets of non-stick wrapping.  Clingfilm, unless of suitable quality is not good to have in direct contact with most foods destined for the freezer and I have found that it degrades with time if you leave foods in the freezer for more than a few months ...  and as someone who has food still frozen from just after we moved here five years ago that is most definitely me!!

Anyway to get back to talking about the actual meat ... Alan now has about 20 single sized portions of ham that can be brought out of the freezer and as it is in such small packs it will literally thaw out in the time it takes to get out and butter the slices of bread or the bun needed to make the sandwich.  Or if it is needed to add a little 'meaty hit' to a pasta dish or a pizza, two slices will more just enough.

The fridge is starting to look a little clearer now, but the freezer is absolutely packed to the gunnels ... it's a good job I'm a Tetris whizz.  Even so I will be happier of heart and lighter of spirit once the fridge is looking as clear as it looked before I got into the Christmas shopping spirit.

But it's nice to think that although I went slightly overboard, thanks to clever tips and techniques nothing will be wasted and we will be eating the foods that I bought until they run out and not just until the packs they are in tell us we can.