Living on a Box - The Store-cupboard and Added Extras 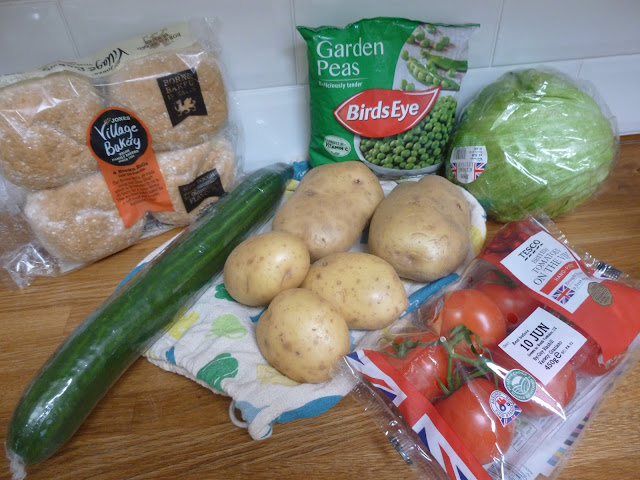 As mentioned in one of my earlier posts I had worked out the weights of the foods in the box that would go towards the government healthy eating guidelines and my much wanted Five a Day, and they came in at just four a day.

So I decided to supplement with a few things that, as well as helping me to reach the required limit, would also expand slightly the meal options I had.

I did not want to go mad and just buy another bag of food as this would completely defeat the purpose of trying to live off the contents of the box for two weeks.  So these foods had to be supplementary foods, not meals in themselves ... although those two big potatoes could quite easily be a meal in themselves!

The things I have bought fresh for the Challenge were the Iceberg lettuce, the tomatoes, the cucumber and the bread rolls.  The potatoes were in the bag in the cupboard and would have gone off by the time this Challenge was finished.  I also decided that I would add the small bag of Garden Peas that I found while clearing a shelf for me to use in the freezer and I already had two bananas that Alan wouldn't eat so I thought they would be good as a second type of fruit to supplement the apples. 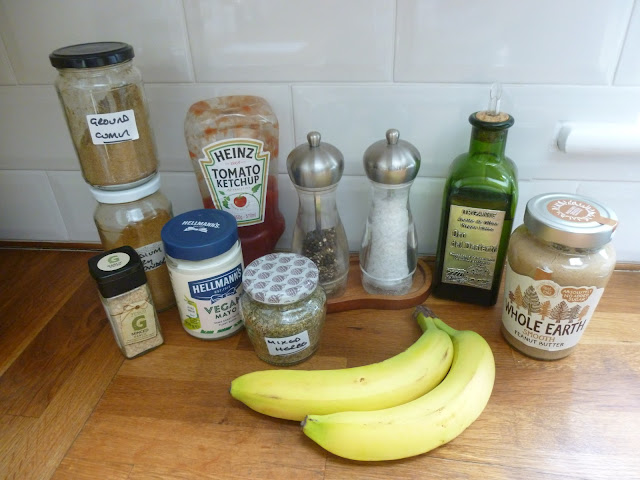 These are my 'store cupboard' items plus the bananas that I forgot to photograph with the things in the last photo.  Just basic items that I believe most people would have in their cupboards to go with their ordered box. Finally I sat down and worked out my definitive Five a Day figures.

I double checked how to calculate this for the dried chickpeas, adding up the total weights of everything shown and then dividing by the 80g needed to make up one portion of your five a day, then adding in the individual items.

My grand total for the Challenge will average out at - 5.5 of my Five a Day.

So, there is no need for me or anyone else to worry that I am eating unhealthily during the course of this Challenge.  And I will not be messing about working out daily totals as I now know that over the course of the two weeks of the Challenge I will be consuming an adequate amount of fruit and vegetables.

One more thing ... ever since starting to write about this Challenge I have had a constant ear-worm, so here you are you can share it with me  🤣🤣