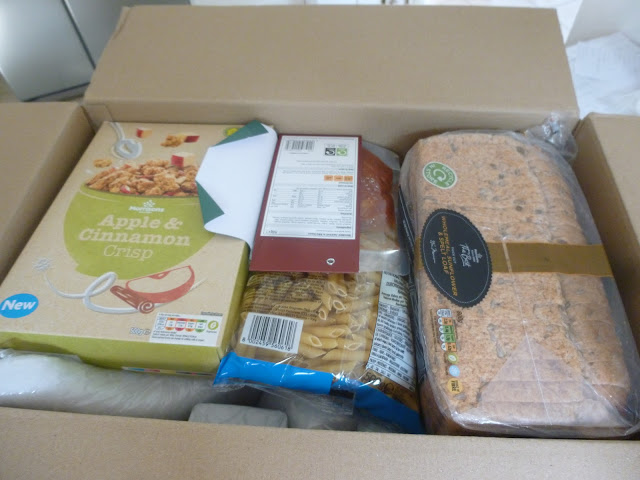 So the box arrived in good condition, with chilled things still nicely chilled and everything neatly in it's original packaging.  Now it was my turn to store the foods so that they would last me for the full two weeks of the Challenge.  Obviously the food in the box is designed to feed two people for one week and so some of the items are designed to be eaten in that time frame. 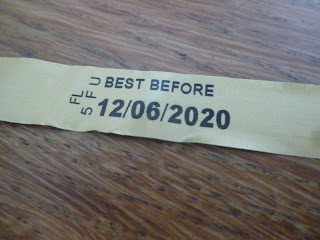 For instance, the bread had a Best Before date of 12th and as the food box arrived on the 8th obviously it would have to be eaten well before the week was out if I wanted it nice and fresh.  But as always I decided the best thing to do was to freeze the bread so that I could take out individual slices as and when I needed them, thus meaning that it could actually last me up to a month. 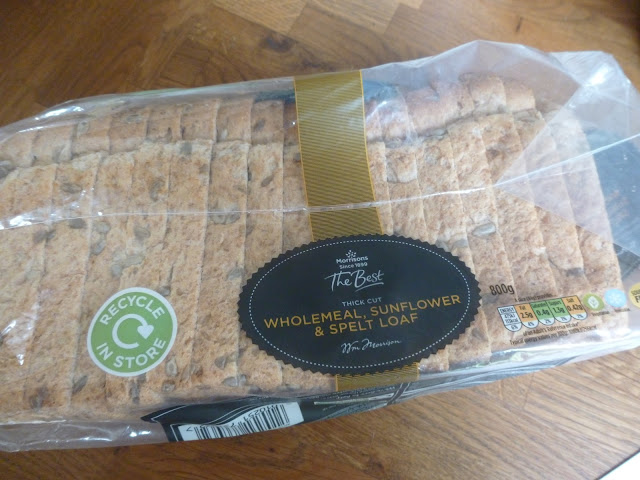 I took off the fastener, loosened all the slices and pegged the bag closed. 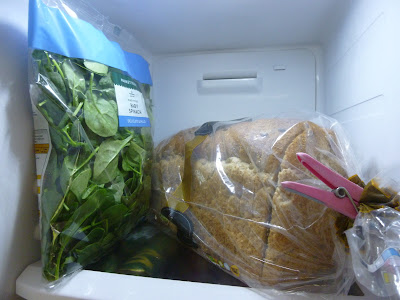 Then the bread and the Spinach were both popped into the freezer.  After a couple of hours I scrunched the spinach to make sure it wasn't freezing together as one big clump and I took the bread out of the freezer, checked the slices had started to freeze nice and individually and then pushed the loaf back together, excluded all the air and fasten it back up with the clothes peg.

Why buy fancy bag fasteners when clothes pegs are so cheap and do the job really well!!

I have 16 slices of bread and 2 crusts to use in my two week meal plan.

Once the bread was nicely frozen I added the pack of buns and the frozen peas to this shelf, along with the lemon slices that I always have in there, and which I will still allow myself one slice of each morning. 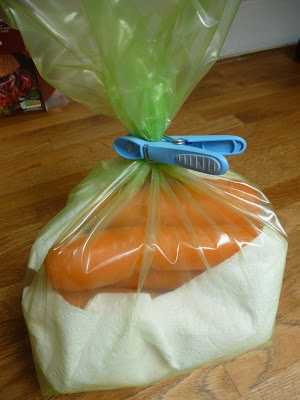 The carrots were taken from their slightly wet bag and laid on a double thickness of kitchen paper and then put into a Stayfresh bag, once again fastened with a clothes peg. 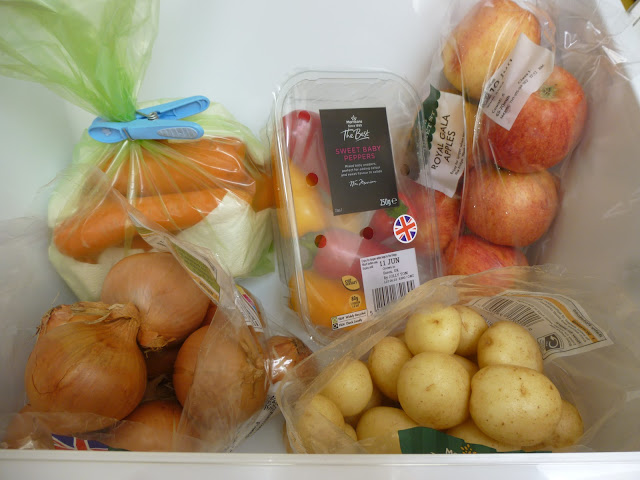 After this photo was taken I added my bought in items, the lettuce, cucumber, tomatoes and the older potatoes to the drawer.  Hopefully everything will now stay fresh for as long as possible. 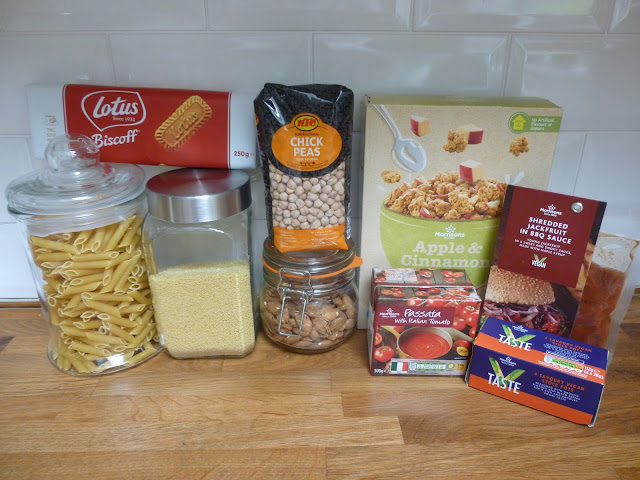 Finally I took a few of the dried items out of their bags and tipped them into jars to make helping myself to portions easier ... and well, because I like things in jars.  It didn't seem worth tipping the chickpeas into a jar as I think I will just soak and then cook the whole bag, and then freeze half of them them to use in the second weeks recipes.  These items will just live out of the worktop for the next two weeks, so I can see them and make full use of them each day.

So ... this is what my food storage areas look like at the moment - 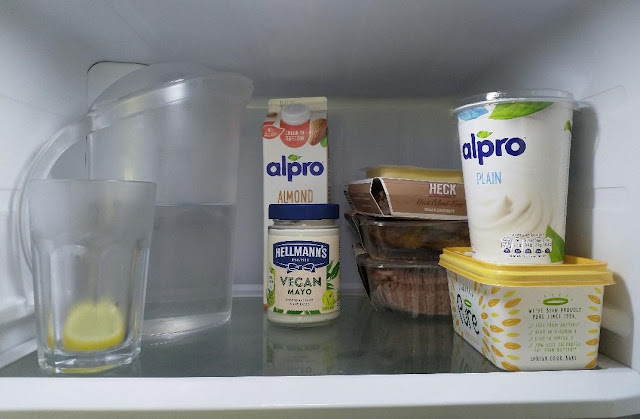 From this shelf the sausages and 'No Chick' strips will be open frozen and the cheese will be grated, divided between two tubs and one of the tubs frozen for the second week. 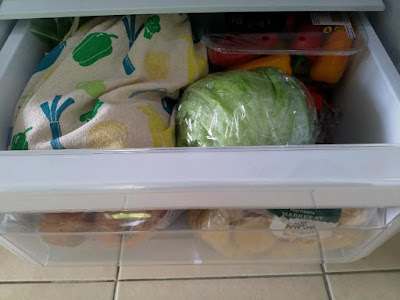 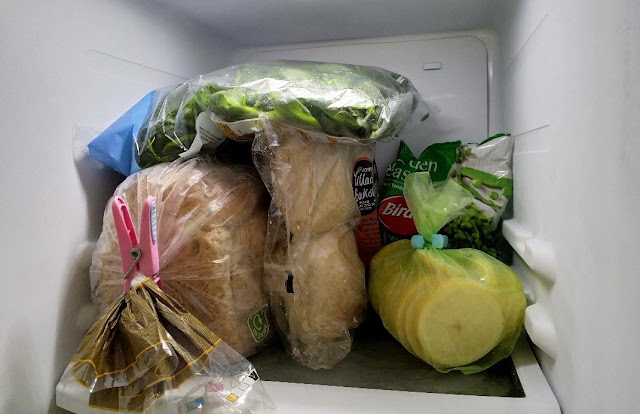 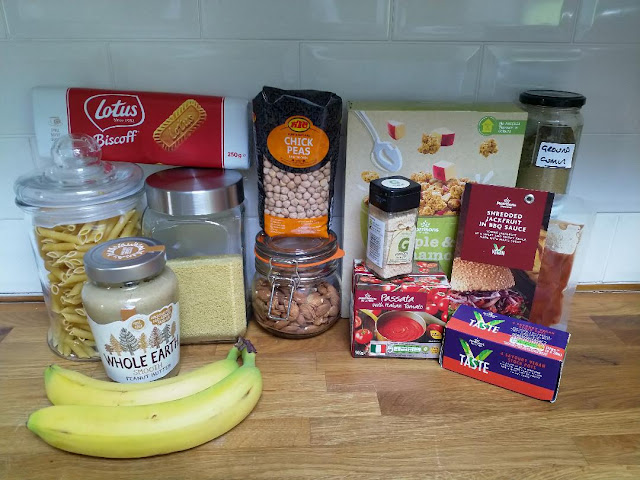 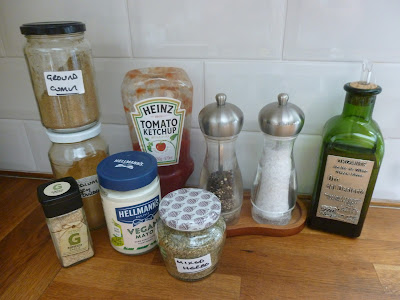 Some of these items are now back in their usual places around the kitchen so Alan knows he can use them too,  but I know I can make use of them as and when I need to.

So that's it almost all of the prep done and it's time to start the Challenge.

Two Weeks Living on a Box