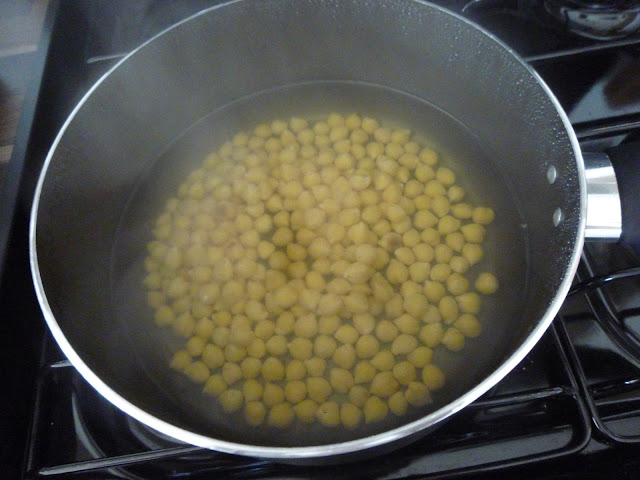 I knew I would have to do something to keep myself busy and thinking about something/anything today (if you read my other blog you'll know what I mean), so last night I put 85g of dried chickpeas to soak in a bowl of water.

Eighty five grams is the Ration Challenge weekly allowance, so I thought I would have a little play with the recipes I have and practice what I think I'll make during Ration Challenge Week and see how many meals I would get out of this small amount.

When I got up I rinsed them a few times and then put them in a pan covered by lots of water.  I brought them to the boil and then left them simmering while I had a drink, a shower and then took Suky for a riverside walk.  I must have cooked them for about 90 minutes in total, but they were fine, and nice and soft by the time I drained them. 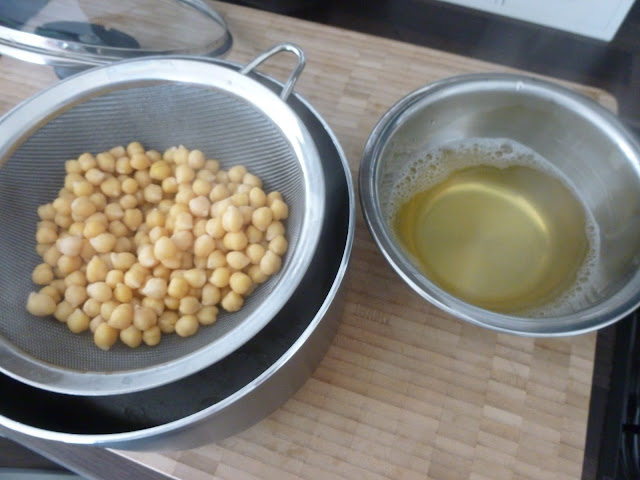 This year I kept back some of the aquafaba, the chickpea cooking water, as there have been a few ideas for how to use it during Challenge week on the Facebook Group. 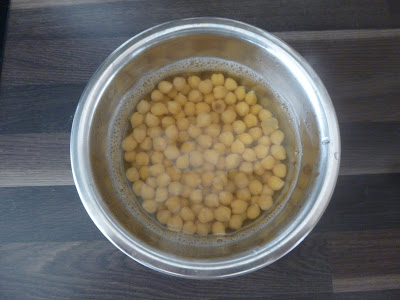 While they cooled I put the chickpeas back into the cooking water that I had saved.  The more chickpea -y it is the better the aquafaba is. 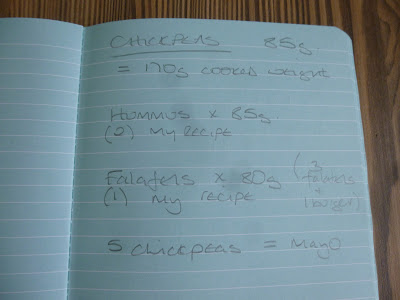 These were the notes I made last week, using the measurements I had last year as a guideline. 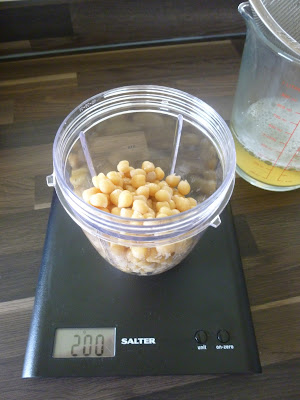 This time though my chickpeas weighed in as 200g once cooked ... ooh extra 😁 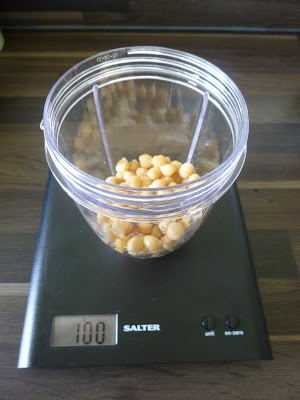 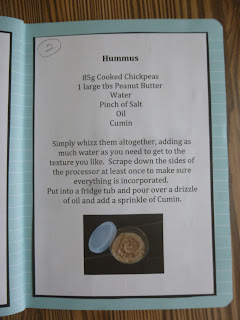 ... and set to to make myself some Hummus using my own recipe from last year, as once again I have enough donations to earn me some protein in the form of Peanut Butter. 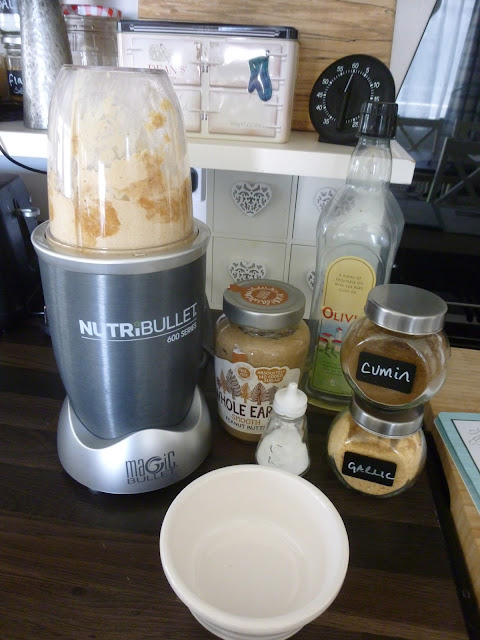 So I added a tablespoonful of peanut butter, a teaspoon of Cumin, half a teaspoon of Garlic Powder and some salt, oil and water to the Nutribullet cup and whizzed it all up, stopping halfway through to add a touch more oil, water and salt to get the texture and the flavour just right. 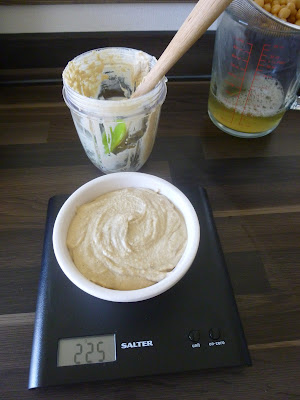 It turned out lovely, and as you can see I managed to get 225g of Hummus from my 100g  of Chickpeas.  Which I think will be enough for one or maybe even two dippy lunches with flatbreads and the rest will be used as a spread on my Burger days. 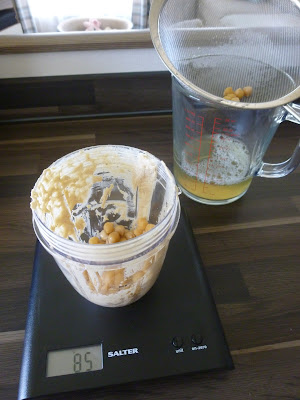 Then without washing out the blender cup ... it would be such a shame to wash away flavour ...I then set to making my Falafels. 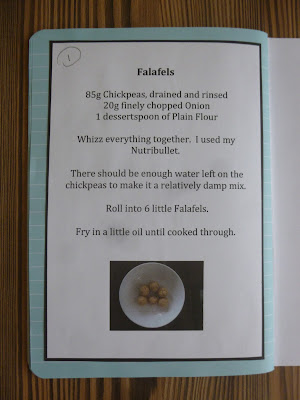 I added all but six of the remaining Chickpeas to the cup ... 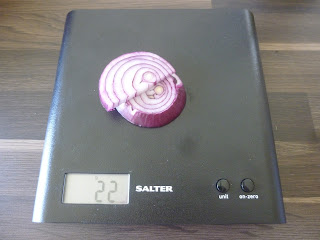 ... then added 22g of red onion, which I chopped up quite finely. 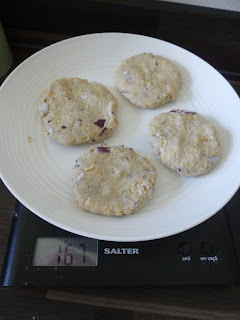 Whizzed up with a spoonful of flour and a smidge of water, this mix made enough for four Falafels.  I decided to make them flat as I wanted to eat them like burgers on a flatbread rather than as rounds on rice. 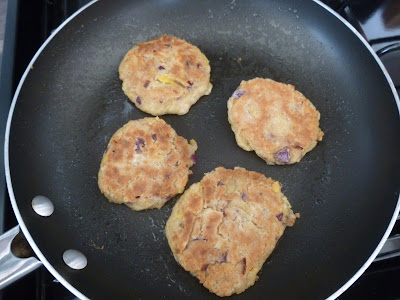 They cooked up lovely  😃 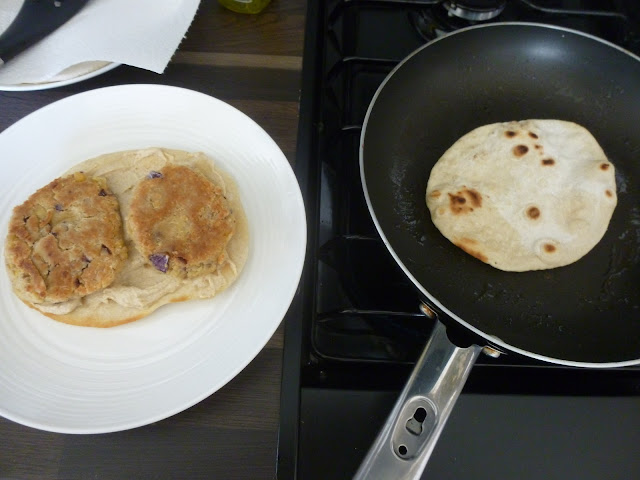 Then I decided to go the whole hog and make myself some flatbreads using 100g of plain flour so that I could try out the Falafel Burger idea.  A flatbread, a good spread of hummus, topped with two of the falafel burgers and then another flatbread on top.

All it's crying out for is an onion ring or two and a nice crunchy lettuce leaf.  I will remember to save a slice of onion for this on Challenge Week ... but there's no chance of lettuce!! 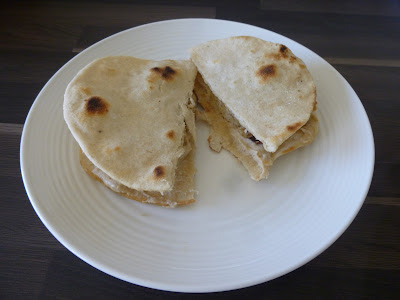 It worked a treat, and it was very tasty ... and very filling.

So that is a definite lunch idea for Ration Challenge Week. 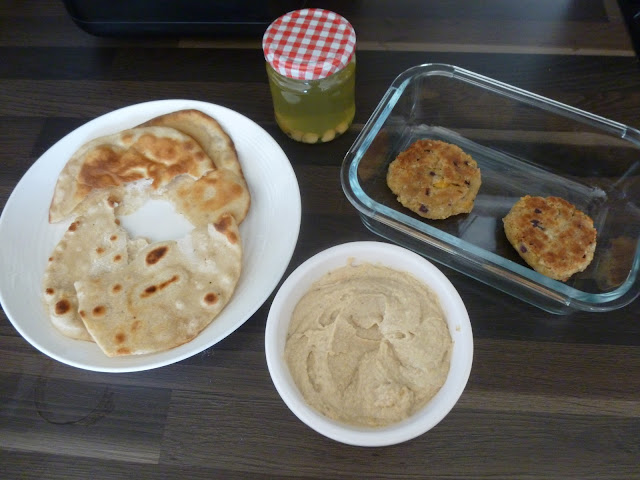 Left over from my lunch I have two falafels, most of the hummus and two flatbreads.  I also still have six chickpeas and the aquafaba, which I intend to try and make into some mayonnaise.  This would also be lovely spread on the bread pretending to be a burger bum.

So during the Challenge week I could either do an action replay and have the same meal on another day or I could make half of the falafel mix into six smaller balls and have these with rice for one of my evening meals.  The hummus will be used for at least two dippy lunches with flatbreads and be used on the day I make the other sort of burgers I have made up my mind to try.

It was good to have a bit of a play with the chickpeas, it took my mind off other things, created lots of washing up ... why do I make so much mess when I experiment ... and reiterated to myself that I do not need to go without flavour or substance during ration Challenge Week.

I need to get back to do more cooking with such basic ingredients and maybe this challenge will set me back on the right path, as well as doing a good thing raising so much money for people who really need our help.

Thank you so much for all your continued support.