Down to Basics - Using Up the Dregs 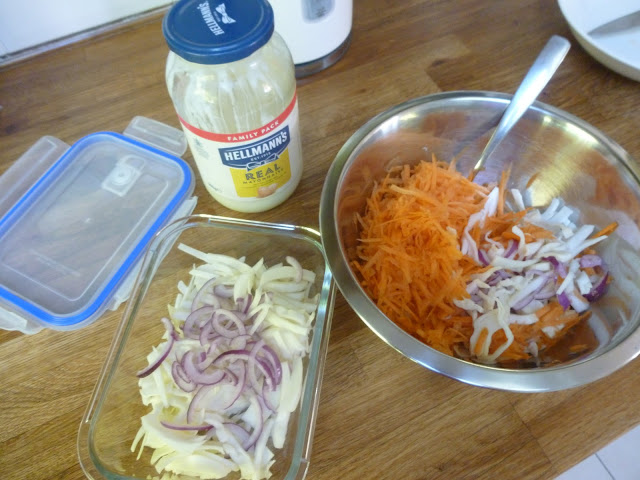 It's been a good week this week for using up the bits and bobs from the fridge drawer.

I decided to make up some coleslaw to use up the ancient half white cabbage ... I dread to think how long it's been in there ... shredding it reasonably finely and adding to it some grated carrot and sliced red onion.  To be honest this is the only way I ever seem to eat white cabbage, either in a homemade coleslaw or when it's too old to be eaten this way by adding the decrepit old remains to the weekly soup pot.

I put some of  the shredded cabbage and sliced onion into a glass storage box so it was ready to use for another meal saving me having to do this all over again, although I didn't add any grated carrot as this would have made it go soggy.  Adding a little bit of cold water to the dregs of mayonnaise in the jar and giving it a good shake meant that I could get every last bit that was stubbornly clinging to the sides of the jar and gave me just enough dressing for my lunch.

The jar was then rinsed out again and added to the recycling box with a rather satisfying thud :-) 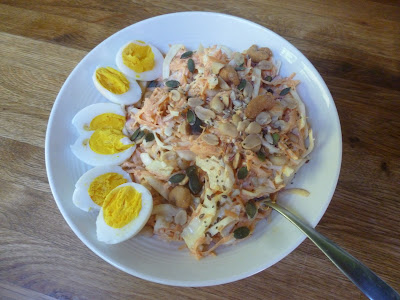 I boiled up three of the little bantam eggs and sprinkled over some mixed nuts and seeds to make this a more balanced meal.  It was delicious and very filling. 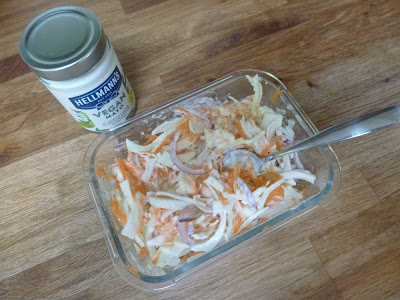 With that mayonnaise out of the way I could at last open my new jar of Hellman's Vegan Mayo, this is much tastier than the Vegannaise that I had tried using, and which had sent me back to the dark side eating mayonnaise made with eggs.  Which I don't mind too much, but I do feel much lighter of conscience with a none egg mayo.

Anyway it's all been foods going out of the fridge,freezer and cupboards this week with only the shopping I showed you the other day being new purchases.  We are on track to simplify the cupboards, although this could take quite a long time ... which is one of the reasons that I have broadened the parameters of this Down to Basics Challenge to include the selling off of our excess stuff at this Summers car boot sales.

My blogs are now happily overlapping in all sorts of areas  :-)

Email ThisBlogThis!Share to TwitterShare to FacebookShare to Pinterest
Labels: Down to Basics, Food