For the Price of a Coffee - Day Six - The Meals 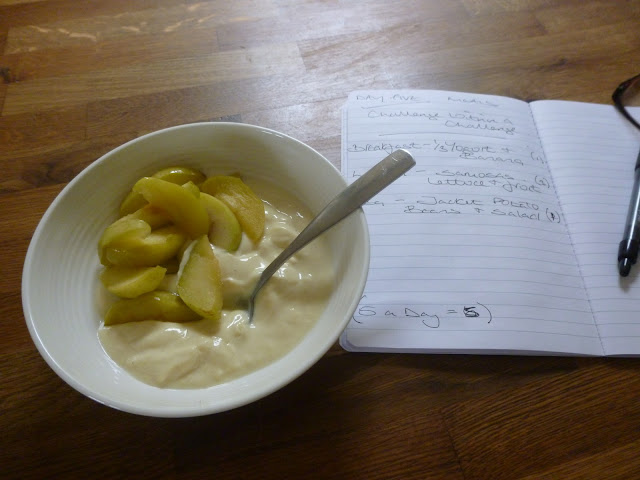 Ooh, that was nice, I decided to cook the apple slices a bit as I prefer them soft with yoghurt. 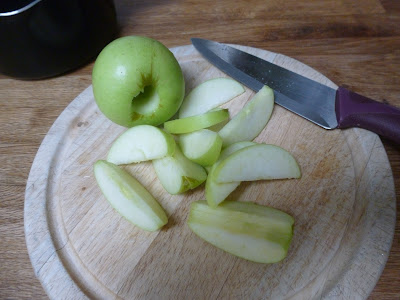 I prepped two of the apples even though I knew I only wanted one with my yoghurt, as I had plans for the rest of the slices for my pudding tonight.  they were simply cored, sliced and popped into a pan with the little tub of lemon juice and a sneaky teaspoon of demerara sugar from a sachet from my little stash. 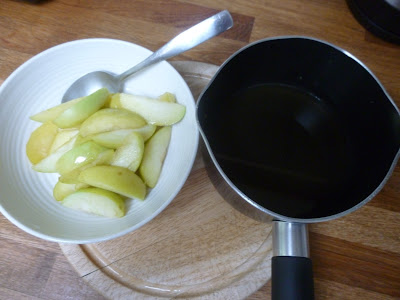 Once lightly cooked I lifted them carefully from the apply, syrupy sauce and put them in a dish to cool. 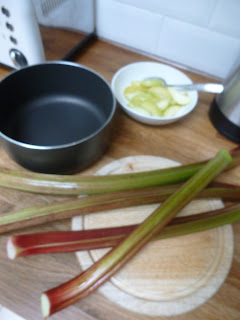 And sliced up the rhubarb that I had spotted on the Veggie Patch.  It is all starting to go over now with the cold nights, and I know how much Alan loves a Rhubarb Crumble.  So I thought it was a good time to prep him a couple of crumbles for the freezer and pinch a cheeky few slices of rhubarb for me.  I cooked it in the syrupy sauce. 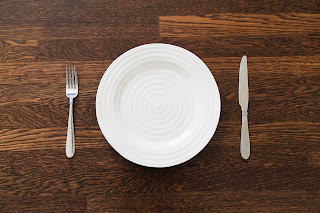 I forgot to photograph my lunch, which was a bloody shame as it looked wonderfully photogenic!!

I had the last of the dhal with 100g rice and a good portion of broccoli, and it was very tasty although far too filling.  I saved a small amount of the dhal stirred through some of the rice. 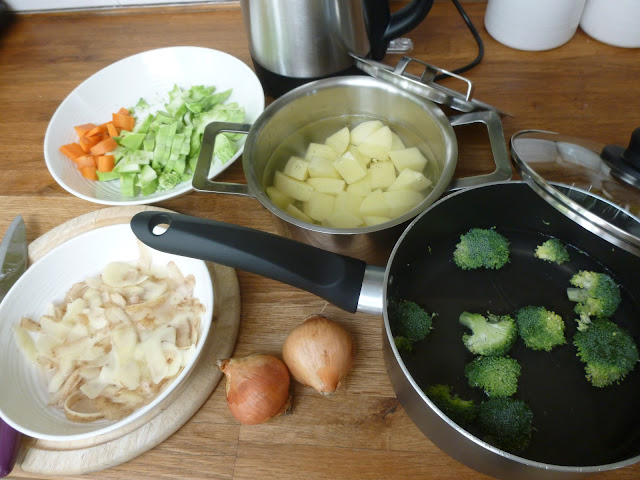 After lunch, while I was still in a cooking mood I set to and prepped my evening meal.  I had decided to use all of the trimmings to make a pot of soup, so it made sense to peel and chop all the veggies and then cook them so that I could have the cooking water in place of stock. 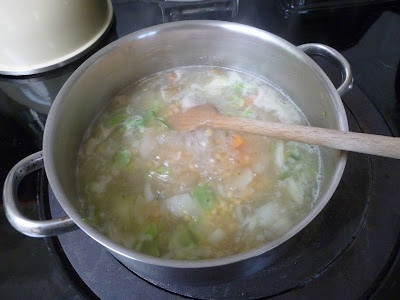 It was soon bubbling away nicely and then spent an hour or two in the bottom oven of the Aga. 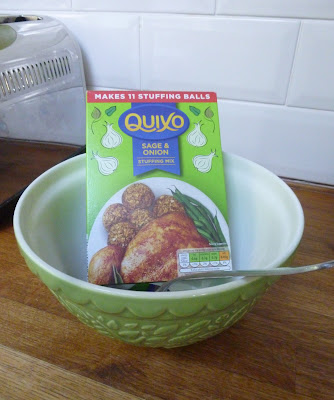 I also made up my stuffing mix into eight little patties. 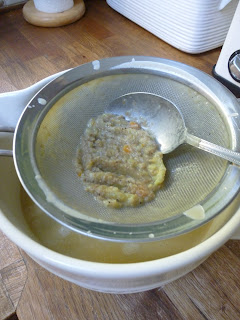 Once the soup was well cooked I whizzed it with the stick blender and pushed it through a sieve.  Nothing was wasted as the chickens got the mush. 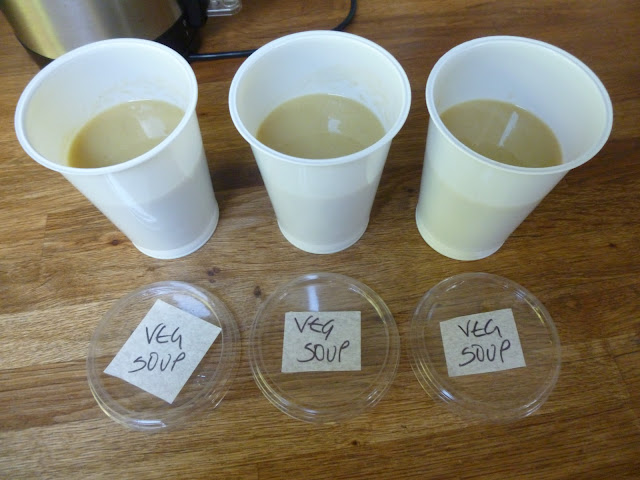 All the trimmings and vegetable cooking water, along with two onions and one clove of garlic gave me three good portions of soup.  Not too big this time as I have found that this is the level that I like in these pots as a serving just for me. 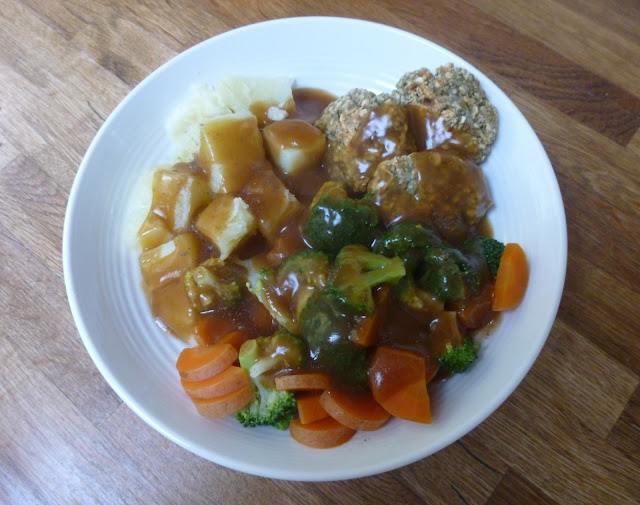 It was very tasty, but missing a couple of veggie sausages for a different texture and taste, although I found this large plateful hard to manage so I doubt I could have eaten the sausages even if I had had them!!. 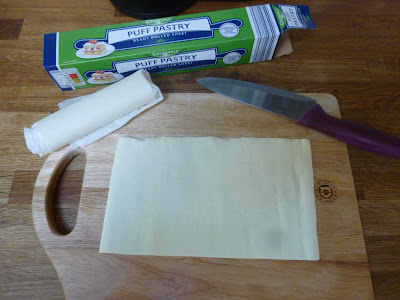 As soon as I had eaten my tea I set too to make myself a little fruit tartlet for later. 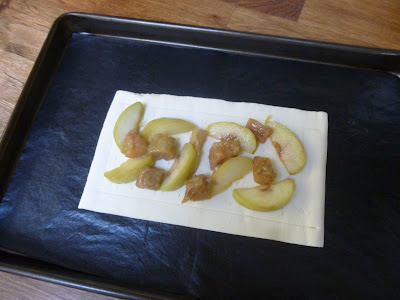 Simply a half of my remaining half sheet of puff pastry scored around the edge and pricked in the middle, topped with most of the remaining apple slices and a few little pieces of the lightly stewed rhubarb.  (I have saved a little bit of the fruit to have for breakfast tomorrow.) 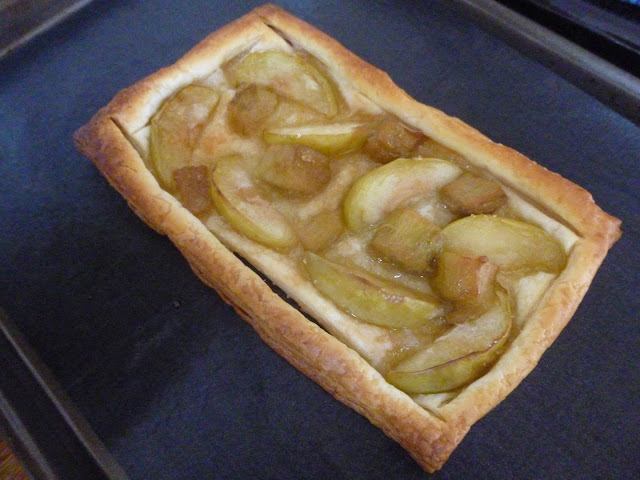 Yummy ... I thought it might be missing some icecream or custard, but it was lovely just as it was with a nice cup of black coffee.

Wow ... I really feel like I have eaten far too much as I sit typing this at the end of the day!!