For the Price of a Coffee - Day Three - The Shopping 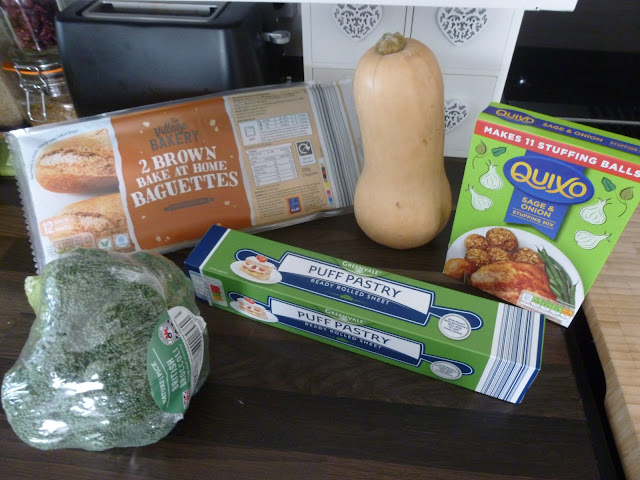 I went out with only half a plan in my mind … and no proper list.

I knew I wanted some ready rolled pastry, shortcrust would have been best but all they had in Aldi was Puff Pastry, so that would have to do.  At just 85p a pack it was cheaper than anywhere else.  I did toy with the idea of making my own, but buying flour and fat would have been more expensive and I don't want to be eating too many things made with flour this week as I am trying to concentrate more on vegetables.

The other things were just bargains I couldn't resist.  A lovely fresh head of broccoli for just 39p and a butternut squash for 69p.

The stuffing mix will be used to make some stuffing balls to have as a sort of roast dinner with some of the veggies, and the part baked brown baguettes will be eaten once with some dhal and once to make a salad sandwich ... after I've been shopping for some salad stuff later in the week. 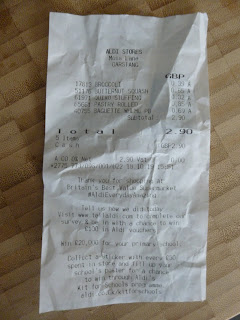 My receipt, accidently crumpled and then rescued, it shows that I have overspent by 3p …. doing maths while wandering around a supermarket used to be my strong point, seemingly not so much these days!

Email ThisBlogThis!Share to TwitterShare to FacebookShare to Pinterest
Labels: For the Price of a Coffee, The Shopping