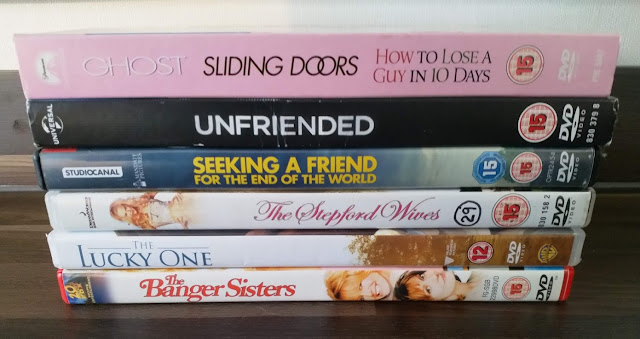 Something free from a charity shop!!

This year we have decided not to buy our usual year long Cineworld cinema passes, instead we are going to stay in at home more ... watching films on Dvd, especially on wet, cold and windy Winter nights.

With this in mind I have been slowly adding to our already large Dvd collection whenever I see something that might be suitable.  Although I have to confess to a distinct shortage of 'action films'  in our current collection and many, many more girly films.  My excuse ... well I'm the one doing the buying at the moment and Alan does tend to fall asleep halfway through a film at home and I'm not going to end up sat watching some boring shoot-em type up film on my own!!

Anyway ...back to the freebies.

And local to my Smaller Life there's one of the charity shops that sells the Dvds for £1 each but  when they have been on the shelf for two weeks, they move down to a box on the floor to make room for fresh stock.  Then they are given a red dot on the price label and are 3 for £1.

And that's when I usually buy them.

And as you can see from this little pile I got another three films in one box.
Five films for £1 = another two free films, or looking at it from their first pricing level ... I got five films for the price of one!!

It might only seem like a little saving, but it's when you take saving right down to the nitty gritty that it really does start to make a difference

Email ThisBlogThis!Share to TwitterShare to FacebookShare to Pinterest
Labels: Freebies Vouchers and Coupons