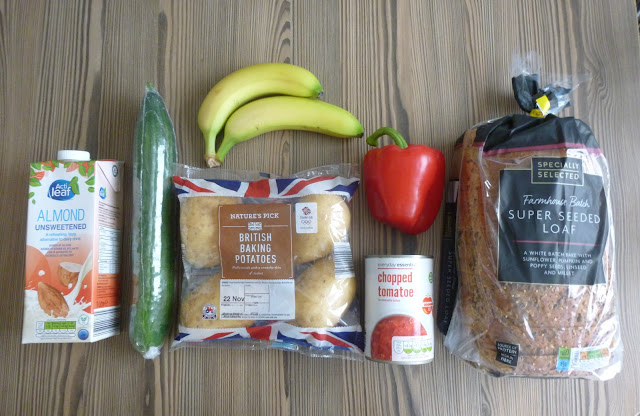 I called to Aldi with my £6.69 clutched firmly in my sticky little mitts and perused the aisles.

It's surprising how cheap some of Aldi's things are, not so may recognisable brands but their own versions of most things are just as tasty.

Yes as you can see I went a little off piste !!

The four potatoes are easily explainable as they come in packs of four for 49p or it's 22p each for single potatoes ... and I needed three.  So it was easier and cheaper to buy four than it would have been to buy three.  There's absolutely no harm in having an extra potato.

The pepper was reduced to just 42p, the cheapest I've seen peppers so I thought it would be a nice addition to the tomato pasta sauce I intend making.  As for the cucumber, again at 54p it was the cheapest cucumber I've seen for a while and it tempted me.  So even with so little money to spend it's easy to get tempted to buy something you hadn't intended too!!

Never mind it will be a nice little addition to my salad sandwiches and my side salads.

I have no idea at all why I have an extra banana but at just 14p each it's not the end of the world ... hopefully. 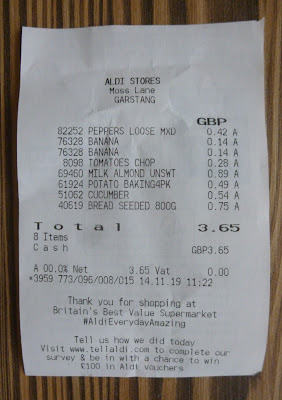 The proof of my spending.

So I have spent £12.56 from my cupboards, fridge and freezer, and then £3.65 in Aldi, leaving me with just £3.04 to buy the missing item from my list - cheese.  Oh and I have forgotten to buy a lemon for my morning drinks so I need to get a lemon too!!

Email ThisBlogThis!Share to TwitterShare to FacebookShare to Pinterest
Labels: Shopping, The £19.25 One Shop Challenge