So that was it, the end of the Eat the Stores Challenge. So what did I do next ... well my first job was to empty, sort out and clean the kitchen shelves.

I mixed a few of the contents of the jars together, split peas, yellow peas and pearl barley were all amalgamated with the dried soup mix, and neatly filled just the one jar instead of four.  I took away the Christmas lights and strung them carefully in the living room to be used as cosy lighting until the batteries run out.  The reason they were lying on the shelf and not hanging along the edge as usual is that I accidentally smashed two of the glass balls, and they weren't safe to hang over a food preparation area.

Then the shelves were given a good clean, everything I wanted on there was put back in place and it ended up looking like the top picture. 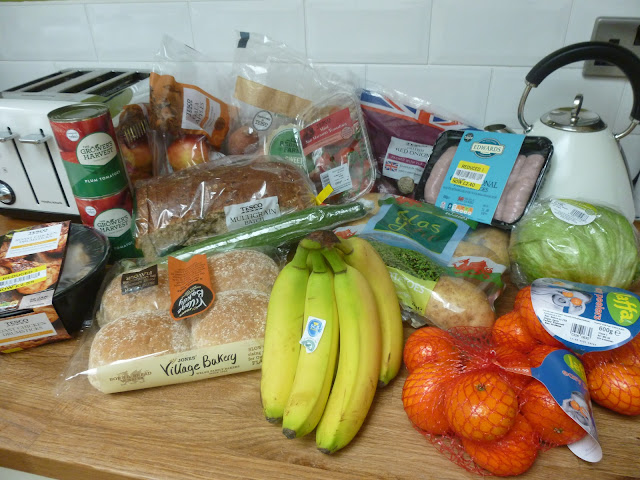 Then I braved the snow and ice and went shopping.

Nothing too excessive, just a couple of loaves, four packs of buns (our favourite Welsh buns are nearly always on offer at two packs for £2 whereas a single pack is £1.20, so when they're on offer I always buy them in pairs), some potatoes, onions, fruit, a couple of salady things and some yellow stickered meat and fish bargains to go into the freezer. 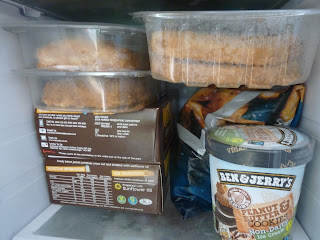 So now one shelf of the freezer looks like this.

I bought two boxes of  McCain Ready Baked Jacket Potatoes as they were on offer at half price.  They are not something I usually buy, but they're handy to have in to add to a meal at the last minute or when either of us is here on our own and need an easy lunch.

I also got a bag of our favourite chunky frozen chips to go with couple of packs of yellow stickered fish portions that I managed to pick up ... it makes for an easy no think about it tea when I'm brain-drained after a day working, a pack of yellow stickered chicken in breadcrumbs for Alan and as my favourite Ben and Jerry's non-dairy ice-cream was also on offer with £1.50 off ... it would have been rude not to get one of those for me   ;-) 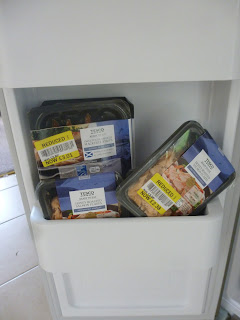 The fishy products went in the empty bottom door pocket of the freezer. 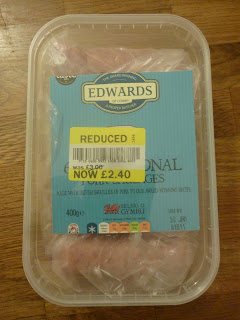 And the sausages, once separated with Easyleave, were popped into a box to join everything else in my now tidy freezer. 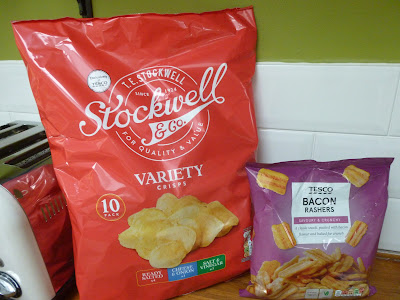 I also got some Six Nations nibbles for Alan.

A multi-pack of 'Stockwell' brand crisps and some of his favourite Bacon Rashers. 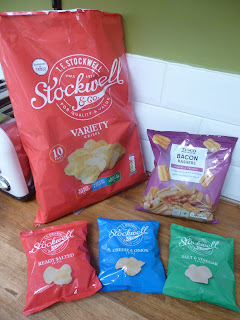 Now these little bags aren't much but when you add them to a plate of sandwiches give you a nice little crunch to add something to your meal (it also, along with the beer, helps take away the pain of your team losing like they usually do).  And at just £1 for a bag of 10 packets they are not to be sniffed at ... although I can only eat the ready salted flavour as even the salt and vinegar flavour have milk products in them for some reason! 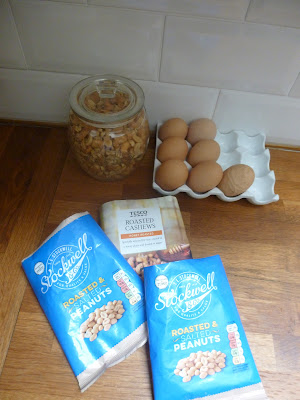 And of course I also topped up his salted nut jar.  As a treat mixing in a bag of his favourite Honey Roasted Cashews as he has patiently waited for a new delivery of nuts for nearly a week.

So that's it Challenge One of this year done and dusted and we are back to normal, well a slightly new normal as I am determined from now on not to be over filling the cupboards or freezer in future.  Just enough in store to eat what we have bought within a few days, and with a back up supply of store cupboard basics that can be made into meals should the worse come to the worse ... you know snow, flood, illness, Brexit ... haha   ;-)

Email ThisBlogThis!Share to TwitterShare to FacebookShare to Pinterest
Labels: End of Challenge Round Up