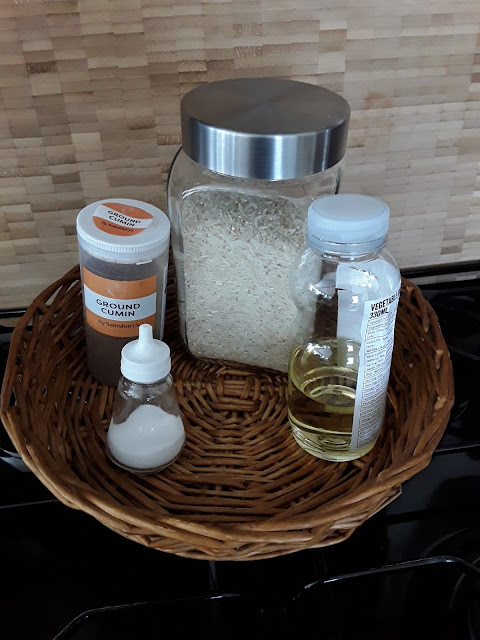 It's over, my Ration Challenge is done and dusted although there are people all over the country starting late and still doing theirs now.  I think this Challenge and it's way of fundraising goes on until August  ... but for me that's it.

My basket above contains ALL of the food I have left except for a half portion of Dhal that I have just discovered in the fridge.  I'll have that for lunch ... with some rice. 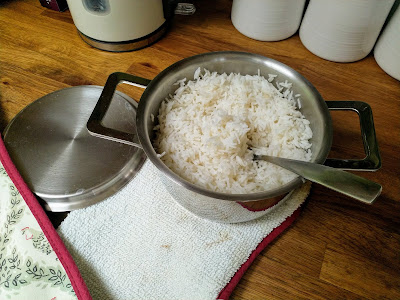 Nope, the excessive consumption of rice last week has not put me off one bit, I thought it might but I'm fine.

The salt cellar in the top photo started the week full to the top, so it goes to show how salt was very necessary for flavour and cooking. 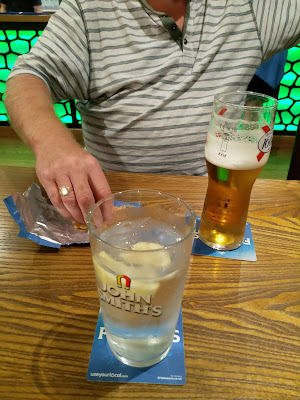 I ended the week in the caravan park clubhouse playing bingo and drinking soda water with ice and lemon.   It was a good night out although neither of us won anything, and I spent most of the evening thinking about food on Sunday morning 🤣

So ... what were the highlights of the week for me and what went well :

Helpful family and friends, no one tried to push foods on me that I couldn't have.

Minimal rubbish - there was nothing to throw away.  The cardboard box, the kidney bean tin and the oil bottle, once it's all used up, will all go into the recycling boxes at home and the little plastic bags and the grey delivery bag are all able to go into the supermarket carrier bag recycling boxes.

No food waste, although to be honest I very rarely have any!

I enjoyed the simple cooking.
Making up to days rice at a time worked well, and gave me the feel of ready meals when I had no energy left to think straight or cook from scratch.  I used up all my ingredients in one go ... for instance when the kidney beans were cooked with a little chopped onion, half were eaten with rice and the other half whizzed into a Kidney Bean Dip for future use.

The Gold Star of the week goes to Dhal.
Using two thirds of my red lentil ration (including the 120g I was allowed for not having any sardines), my earned spice Cumin and one of my onions to make a large portion of Dhal was a genius idea of mine.  It added a pop of flavour, colour and perhaps most importantly protein to every bowl of rice.

Rice Brain
A fog of indecisiveness,  lethargy and complete bleugh that descended on the third day.

Lack of caffeine
The hit I got after my Wyevale coffee 'earned'  for getting to over £600 was amazing!

Struggling to blog
Definitely a sIde effect of Rice Brain - see above!

No spontaneity.
I'm a very spontaneous sort of person, with food, outings and things that I do.  Not being able to grab a coffee whilst out and about, not having the ability to rummage through the cupboards or the fridge for a meal, or have the energy to simply get on with a job was VERY hard. 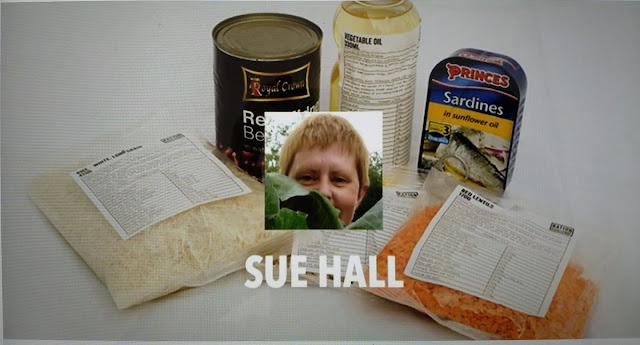 Thank you to each and every one of you that contributed to my Ration Challenge sponsorship money:

I thank you all from the bottom of my heart and hope that I haven't missed any names off the list.  But please know that even if I have ... between us we have managed to raise the magnificent sum of:

If this was to be used just for buying food rations we have raised enough money to feed FIVE refugees for A WHOLE YEAR.

The Ration Challenge UK total currently stands at £771,965, how absolutely wonderful that we are a part of this magnificent fund raising.  There is nothing else left to say except ... what a brilliant result,  and once again thank you.

Email ThisBlogThis!Share to TwitterShare to FacebookShare to Pinterest
Labels: End of Challenge Round Up, Ration Challenge