Ration Challenge - The Added Extras, the Swaps and the Earned Foods 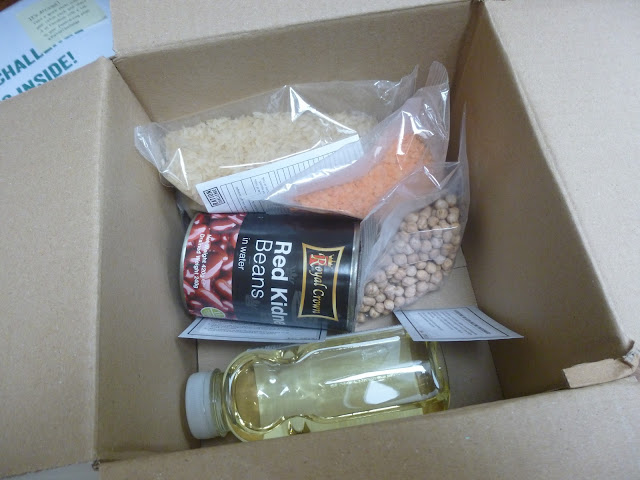 When your Ration Challenge box arrives it is a real eye opener.  The amount of food for one person for a week at first seems tiny. 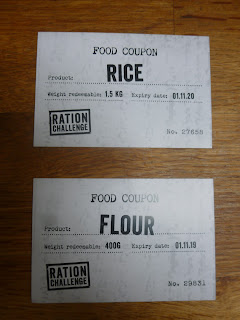 Then you find your coupons and realise you have an additional 1.5kg of rice to add and 400g of plain flour.  This brings the ration pack inline with what a single refugee would receive for one weeks worth of food, although at the camps the boxes come as a large pack for six people for one month. 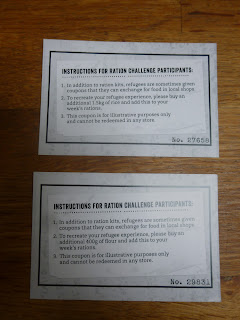 Refugee families receive similar coupons to the Challenge participants but they take theirs to a local shop on or just outside of the camp and swap them for a sack of rice and a bag of flour.  Obviously our shops wouldn't do this so participants in the Challenge either buy, or as I have done weigh out the amounts from stock at home ... this is therefore in keeping within the ethos of my ongoing Down To Basics Challenge. 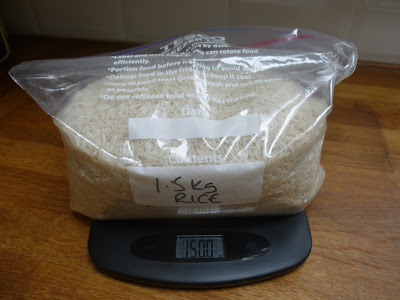 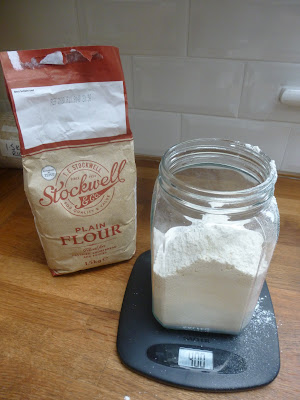 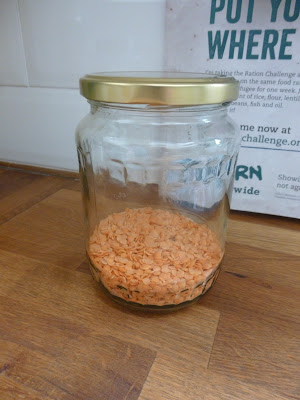 As the ration packs usually come with a tin of sardines, vegans and vegetarians have the option of asking for this to be omitted and are permitted instead to add an equivalent 120g of alternative protein to the ration pack.  As I think people who don't eat fish in the camps would swap their ration for foodstuffs readily available, I decided rather than to go down the suggested tofu route, to instead add an additional 120g of red lentils to my pack.

It doesn't look much though does it !! 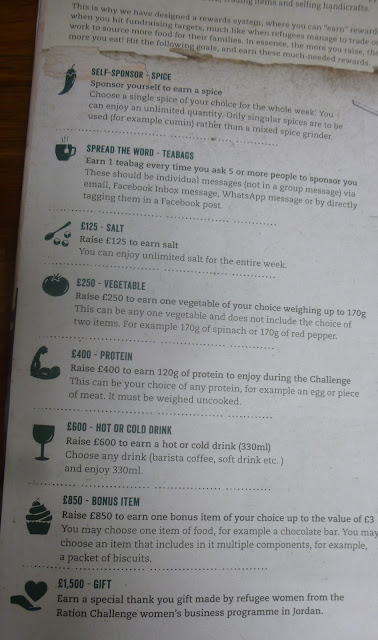 In the refugee camps refugees have the ability to volunteer to help with the many, many jobs that need doing to help the camps run efficiently, in return they qualify for some little extras to add to their rations.  In a similar way the Challenge has been set up with incentives for participants to fund-raise to the best of their ability.

It can be hard to ask for money but when it's for a cause close to your heart and there is a way of making a hard challenge just that little bit more tolerable you grit your teeth and do it.  As you can see from this photo there are quite a few tiers of earned foods available. 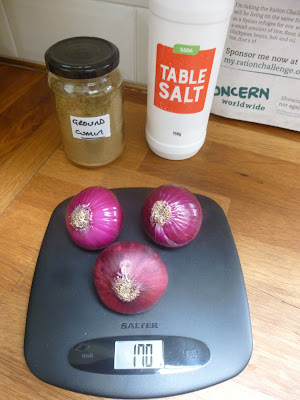 Most participants self-sponsor to get things rolling thus earning themselves a single spice of choice, I chose Cumin as mine.

For every five or more named people you ask to sponsor you there's a teabag to be earned ( I don't drink tea as it makes me ill, so I was totally upfront with everyone I asked and said I would be converting every five teabags I earned into one cup of coffee).  I can now have one cup of coffee per day of the Challenge.

When you pass the £125 fundraising mark you qualify to be able to use unlimited amounts of salt in your cooking.

At £250 and above you are entitled to choose one vegetable up to 170g in weight - I chose onion.  They are red onions because that is what I had in the fridge. 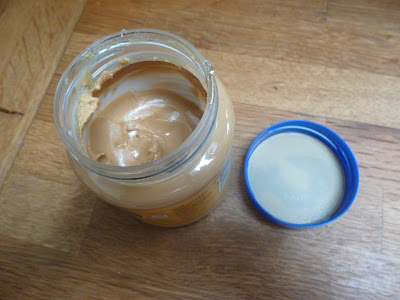 For passing the £400 mark I am allowed to add an additional 120g of protein to my ration pack - I chose what was left from this jar of peanut butter, just under the allowed amount but it will do for me and at 25% protein it is a good addition to what will be a bland diet. 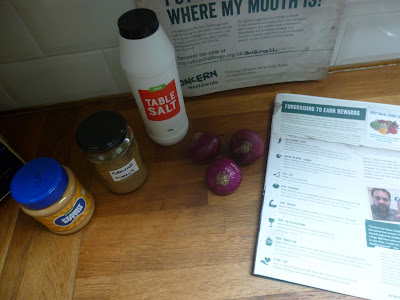 So these and my seven spoonfuls of coffee are my additions to the Ration Challenge pack I received through the post.

My fund raising target is set at £600 ... if I achieved this I would be allowed to add another drink up to 330ml in volume to my supplies, and if I stormed past this to the dizzying heights of £850 I would qualify for a single food item up to the value of £3 ... now what would I buy,  there's been lots of debate on the Ration Challenge Facebook Group page about this one.  I really don't know ... but looking at the food I already have available I'm thinking something like a large piece of fruit ... a melon? A huge banana?

What would you buy if you had £3 to spend on a single item, it has to be a single thing and cannot be something with component parts like a packet of biscuits or a pack of six yoghurts.  It's a puzzle for sure.

My sponsorship page is HERE if you would like to sponsor me.

And many, many thanks to all those of you who already have.  💖